Oroville Dam was constructed in 1968 and stands as the tallest earthen dam in the United States, at a height of 770 feet. The Dam impounds Lake Oroville which is the second largest man-made lake in California and stores more than 3.5 million acre‑feet of water. Lake Oroville is a mixed-use facility providing recreation, flood control, water storage, and hydroelectric power. The Oroville Dam facility includes six power generating turbines in the Edward Hyatt Powerplant and two spillways: a gated, concrete-lined Flood Control Outlet (FCO) and a concrete monolith weir with an unlined spill area (Emergency Spillway).

On February 7, 2017, damage occurred to the Oroville Dam’s FCO during flood control operations during an extraordinary precipitation event. With high reservoir inflows, continued operation of the damaged FCO was unavoidable, leading to erosion of the slopes and lower spillway, as well as operation of the Emergency Spillway for the first time since its construction. Formation of a large scour hole in the FCO as well as rapid headward erosion in the slope beneath the Emergency Spillway structure ultimately led to the evacuation of nearly 200,000 downstream residents. Within a few weeks of the initial spillway incident, the Department of Water Resources (DWR) assembled the Spillways Recovery design team and began to lay out short- and long-term repair alternatives for functional spillways in the 2017-2018 winter wet season and beyond. This included an automated monitoring program.

As part of this response, DWR’s Project Geology Section implemented an automated monitoring platform to monitor groundwater and slope stability before, during, and after construction of the spillway repairs. Among other factors, the main selection criteria used to select an automated monitoring platform included: fast deployment (both automation hardware and data visualization), reliable data availability, support for a wide range of existing and newly installed sensor technologies, available to a wide range of users, and be deployed during construction under the Construction Contract (Kiewit retained Terracon) as well as be transferred to DWR upon completion. DWR, Kiewit, and Terracon selected sensemetrics as the monitoring platform which met these criteria and successfully delivered a complex and diverse monitoring system composed of vibrating wire piezometers and weirs, in place inclinometers (IPI), Shape Arrays (SAA), weather stations, water quality sensors, and automated motorized total stations (AMTS). To date construction milestones have been met and DWR continues to monitor instruments using the sensemetrics platform.

As a result of implementing the sensemetrics platform during the Oroville Dam Spillway repair efforts, California DWR and emergency response partners had access to real-time sensor data, including graphs, reports, maps, and real-time alerts, and was fully configured within three (3) days rather than the budgeted three (3) weeks. In addition, optimized system design resulted in hardware and installation cost savings of over $200,000. 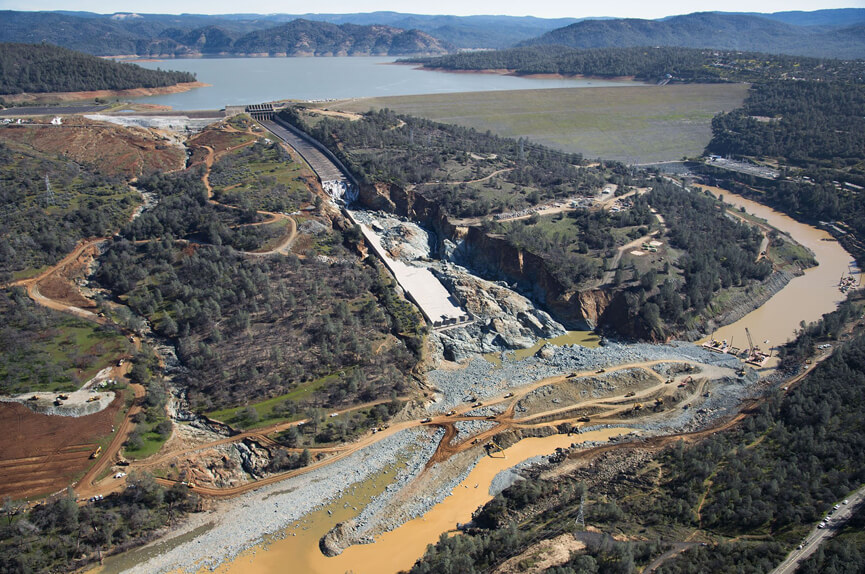